November 14, 2009, the Dunnville Mudcat “Muddy” was unveiled. A three-year effort to bring the town’s mascot to fruition in bigger-than-life form has been realized. Muddy, the giant mudcat, is 50- foot long, 27-foot high statue’s permanent home at Centennial Park at the western entrance to Dunnville. 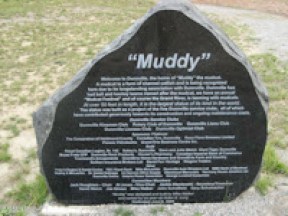 “Welcome to Dunnville, Home of “Muddy” the mudcat.
A Mudcat is a form of channel catfish and is being recognized here due to its longstanding association with Dunnville. Dunnville has had a ball and hockey teams named after the mudcat, we have an annual “Mudcat Festival” and of course the Grand River is teeming with Mudcats.
At over 50 feet in length, it is the largest statue of its kind in the world.
The statue was built as a project of five Dunnville service clubs, all of which have contributed generously towards its construction and ongoing maintenance costs.

Plenty of parking and there are some picnic tables as well as an area of grassy walking paths. Dunnville itself is a quaint little town with a surprising amount to see and do, and now one more thing to see when you visit!

Make the trip to Dunnville Ontario to see the “Big Fish”, Muddy!

The building of “Muddy” https://youtu.be/Xf9R4cDM0m4